The Great Gowanus Expedition of Aught-Nine

Ive been meaning to post these pics for a while now….here they are. Two weeks ago, on a drizzly day, I left early for work and stopped at the Gowanus Canal, in Brooklyn. The mighty Gowanus is one of New York City’s better-known waterways, though not entirely for the right reasons.

Until 1849, the the canal was a tidal creek in a marshy area of south Brooklyn. That year, the New York State Legislature authorized it to be dredged and channelized to allow shipping easier access to its upper reaches. Construction of the canal was complete by 1869 or so. Since then, it has been through shipping boom and bust, and, thanks to nearby industrial operations, sewer overflow outlets, and chronic water-flow and flushing problems, is now one of the most polluted water bodies in the city. In April of this year, the EPA proposed listing it as a Superfund site. Mayor Bloomberg says he would rather skip the federal Superfund listing and let the city clean it up on its own.

Here are a few of the pictures I took to document my trip to the headwaters of the Gowanus. The full album can be seen here. 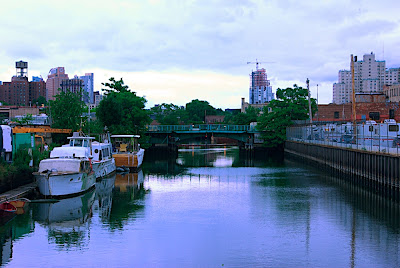 View of the Gowanus from the Carrol St. Bridge.

For most of its existence, the Canal has been used as a dumping ground for all manner of human refuse. The sign above this sewer overflow outfall says to call the Department of Environmental protection if discharge occurs in dry weather. Discharge is expected in wet weather when too much runoff overwhelms the sewer system. The day I took this picture, it had been raining for about six weeks straight. 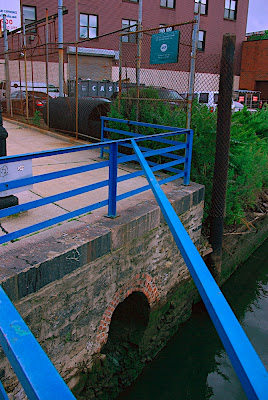 Sewage outfall pipe, with DEP sign above saying to call them if shit is flowing out in dry weather. 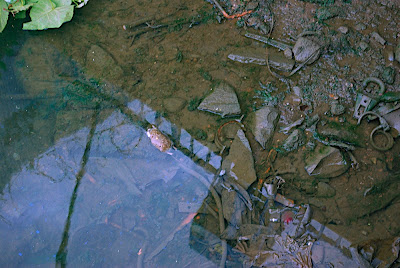 I didn't see any Mafia bodies, but I did find this dead rat, gasified and floating in a little backwater. 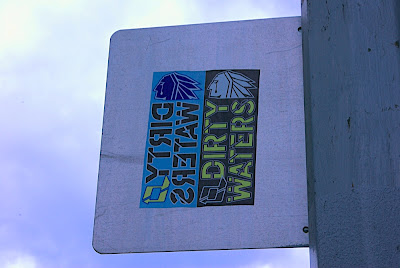 Appropriate weeping-Indian-chief sticker on the back of a parking sign. The canal's name actually comes from Gouwane, the sachem of the local Canarsee tribe in the early 1600's.

The rest of my photos can be found in my picasaweb album.