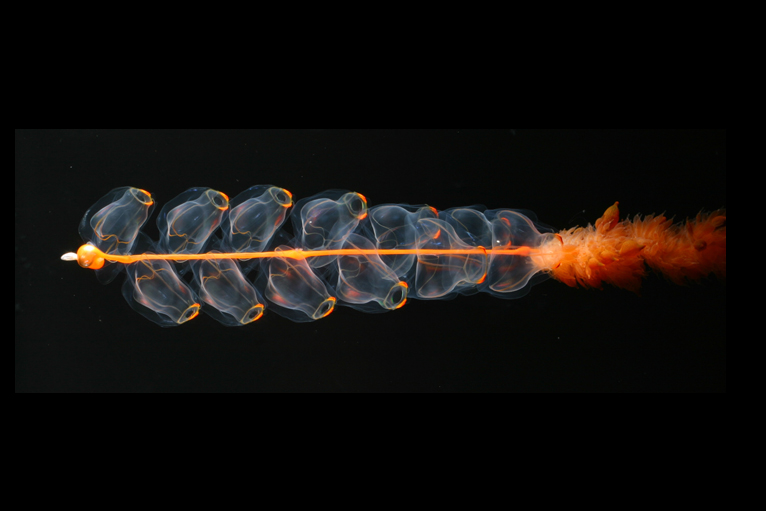 The physonect siphonophore Marrus orthocana, from the Canada Basin in the Arctic Ocean. Photograph by Dr. Kevin Raskoff, via the BBC.

The BBC has just posted a story about a 2005 expedition to the Southern Ocean, funded by NOAA and led by Kevin Raskoff of Monterey Peninsula College. The results from that cruise, “The Hidden Ocean Arctic 2005,” (who knew? NOAA titles its cruises like TV specials. Coming soon: Southeast Regional Stock Assessment Fall 2009: The Vengeance) are going to press now, which is I guess why the BBC picked up the story today instead of sooner. And the article plays fast and loose with taxonomy, notably in this little gem:

Other jelly-like creatures seen included ctenophores, an unusual group that can look like jellyfish, but are not able to sting, siphonophores, which are actually colonies of smaller animals living together in a structure that looks like a single, larger animal, and larvaceans, plankton-like creatures unrelated to jellyfish.

Ctenophores are actually quite common pretty much anywhere you go in the ocean, and don’t look much at all like the cnidarian medusae that most people think of as “jellyfish”—see the masthead of this blog. Larvaceans are technically plankton, not just plankton-like, and are much more closely related to humans than they are to most invertebrates. (They are also, IMHO, among the trippiest of God’s creatures.)

But who cares, because along with the story is an absolutely stunning slideshow of bizzare deep arctic jellies, some new to science. For even more beautiful pictures, check out Dr. Raskoff’s own picture gallery on his website.